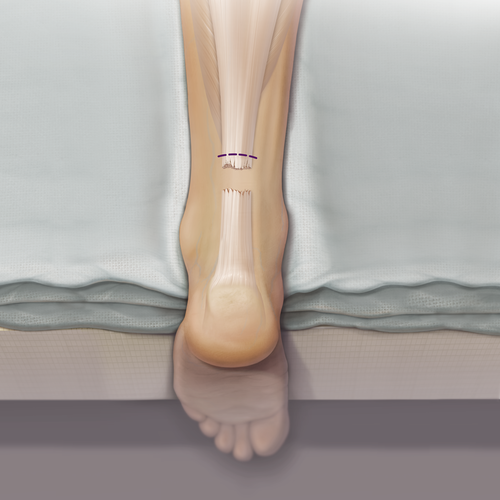 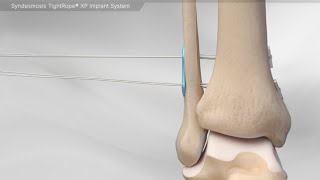 The two bones in the lower leg, the tibia and fibula meet at a joint called the syndesmosis. The syndesmotic joint functions as a joint, but has very little movement when compared to other joints. It functions to provide stability to the ankle joint.

Patients may complain of pain, swelling, bruising or immediate loss of motion. Often the patient feels a pop or snap. If the fracture fragments are severely displaced, a deformity may be present.

The surgeon will examine the ankle and obtain X-rays to evaluate the injury. Some fractures or injuries to the ankle may require further imaging for complete diagnosis.

Simple fractures of the ankle can be treated non-operatively. A cast is applied to the ankle for six weeks or more and the patient is instructed to remain non-weight bearing during most or all of that time. If the ankle syndesmosis is found to be unstable, even without ankle fracture, surgical repair is warranted.

Fractures of the ankle that are displaced require surgical intervention. In isolated ankle syndesmotic injuries, a suture device will be applied to the ankle to reduce the joint and reproduce the rotational forces of the normal ankle syndesmotic joint. If the syndesmotic injury occurs in combination with an ankle fracture, then the suture device can be combined with standard ankle fracture plating and screws. Postoperatively, a cast may be applied and the patient will be non-weight bearing for a period of time. 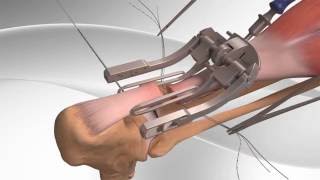 Achilles ruptures usually occur as a result of a non-contact injury, such as a sudden change in direction or sudden push off of the foot.

Patients complain of immediate pain and loss of strength. Most will describe the sensation of being kicked or feeling a pop.

On physical exam, the surgeon may feel a defect in the tendon. Squeezing the calf, which usually causes the foot to contract downward, has no effect when the Achilles tendon is truly ruptured. X-rays are usually normal, unless there is bony involvement elsewhere in the foot or ankle.

Achilles tendon ruptures can be treated with immobilization in a cast or boot. The patient is instructed to be strictly non-weight bearing. Re-rupture rates are higher with non-operative treatment.

Most orthopedic surgeons recommend operative repair of Achilles tendon tears. A percutaneous incision is made and the torn tendon ends are approximated back together. The ankle is placed in a cast or splint. After an initial period of immobilization, physical therapy is started to regain strength and range of motion.

Trauma, such as a twisting injury to the ankle, causes most sprains.

Patients complain of pain over the injured area, swelling, bruising, loss of motion and inability to bear weight on the ankle.

Physical exam reveals tenderness over the involved ligaments, as well as, bruising, swelling and loss of motion. X-rays are normal except in the case of a syndesmotic injury. If the syndesmosis is injured, the distance between the tibia and fibula will widen, and the talus will shift laterally. X-rays will show increased joint space between the talus and medial malleolus.

Ankle sprains are treated with rest, ice, compression or wrapping the ankle, elevation of the ankle to bring down swelling, and anti-inflammatory medications. A brace may be prescribed to support the ankle while the injured ligaments heal. Physical therapy is begun to decrease the recovery time, and regain strength and range of motion.

Patients who have continued instability despite non-operative treatment may be candidates for surgical intervention. A variety of surgical techniques are used to amend lateral or medial ankle instability. If patients do not have any healthy lateral or medial ligament tissue to repair, a lateral or medial ankle reconstruction will be performed. Tunnels are drilled in the bones where the injured ligaments normally attach and a graft is passed through the tunnels and secured. A cast is applied for 6 weeks or more to protect the reconstructive repair.

Locate a doctor in your region